Remember the trading card I mentioned a few posts back? Here is the artwork for it. 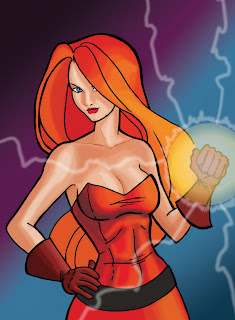 It's gonna be part of a set for the War of the Independents comic book that features my character! I am sooo excited!
Posted by MFC Studios at 10:21 AM No comments:

I will let the article speak for itself!

Saban Capital Group recently announced it has purchased the Power Rangers property back from the Walt Disney Company. Immediately, another news release announced that Nickelodeon and Saban Brands have partnered to put the Power Rangers on the air for an 18th TV season.

Saban introduced the first Mighty Morphin Power Rangers series in 1993 and made a mint off it. His acquisition from Disney includes worldwide rights to the brand as well as over 700 episodes produced over 17 years. The TV deal consists of 20 new episodes on Nickelodeon and Nicktoons in 2011, with the catalog of 700 episodes launching on Nicktoons later this year.

Produced by SCG Power Rangers LLC, will commence production in summer 2010 with original Executive Producer Jonathan Tzachor back at the helm and a new cast, look and theme for the show.

Following its introduction in 1993 on the Fox Kids Network, Power Rangers quickly became the most watched children’s television program in the United States. The series has been translated into numerous languages and rose to become the #1 boys brand in the world from 1993-97, based on toy sales and television ratings. The Walt Disney Company acquired the franchise in 2001 as part of its purchase of Fox Family Worldwide, which included Saban Entertainment and its library of children’s programs. To date, Power Rangers has aired in over 60 countries and the property’s licensed products and promotions have generated well over $5 billion worldwide.

This marks the first property for Saban Brands, the recently formed subsidiary of Saban Capital Group, which was created to manage and license entertainment properties and consumer brands across media and consumer platforms throughout the world. Saban Brands also announced a new long-term master toy and video game license agreement with Bandai Namco Group, which has been the toy partner for Power Rangers since its inception. Saban Brands will manage the Power Rangers brand worldwide including licensing, merchandising, consumer promotions and brand extensions.

I am sooo Freakin' excited!
Posted by MFC Studios at 2:23 AM No comments:

Since the new show and (hopefully) the site will reflect a broader subject, I think it is about time to change this blog from "The Comic Book Novice" to MFC Studios. I mean really, what have I been talking about that has to do with the old CBN show? However, since that show ended, and the new one started I have been keeping up this blog. so instead of just losing down this place and lose what ever followers I have left, I will just re-nmae it and carry on. Think of it as a going from Three's Company to Three's a Crowd.
Posted by MFC Studios at 2:01 AM 2 comments:

From my newest webmaster some designs for a new logo and a pic of my unofficial mascot. 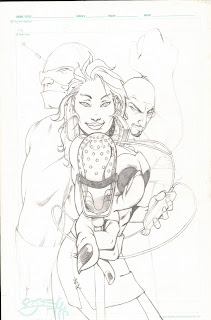 what do you guys think?
Posted by MFC Studios at 4:47 PM 2 comments:

Here is a little bonus for you radio show fans....Seems a good friend of Charlie's has started archiving our shows to be listened via podcast! so from now on, you can go to any podcast place of your choice and just type in "It Came From The Radio" and we should pop up! Now you cna listen to our crazy antics at your leasure, Of course our shows will still be broadcast live 9pm EST each and every wednesday!
Posted by MFC Studios at 1:06 AM No comments: