Transformers: Revenge of The Fallen

First let me say a few things: I hated the first Transformer live action movie (LOVED the original however). Second, I just found out a little bit of information from my friends over at Comicmix with that in mind, let us continue....

This is a free flowing conversation and spoilers (most likely) may be mentioned. Yeah, this is what this movie really is about. What can I say about Megan Fox that hasn't been said? She was one (of two) reasons I went to see the sequel. But enough about the fluff. What did I think of the plot, story, the special effects? Well, I just can't say this enough. I like things to make sense. Even with guilty pleasures at least some of it needs to make sense. I enjoy stupid comedies, but they don't take themselves seriously. Transformers takes itself very seriously (during the serious parts of the movie). Since that is the case, then I usually do the same.

Before I go into all the problems this movie had, let me say a few (actually four) good things about it.

1) Frank Welker. I was so excited that he voiced Soundwave in the movie. As most of you may know, he was the original voice of Megatron AND Soundwave (to name a few) in the cartoon. Of course, (for some reason) he still wasn't good enough to reprise Megatron in this movie....

2) The fight where Prime dies. Even tho it was hard to tell what was going on and who was who, Seeing Prime kick some serious butt is always awesome.

3) Optimal Optimus. Even tho he really didn't look like it, when Prime was...upgraded it reminded me of the cartoon Beast Wars where Prime got a similar upgrade. Now onto my questions/problems:

1) Why is it when Spike died and went to..Transformer Heaven he was told that one doesn't take the matrix, one must earn it. Only 5 minutes later does The Fallen come by and say "Thanks for the Matrix!" and TAKES IT!

2) There are two pieces of the All spark cube left: the military has one under lock and key, and Sam discovers another. How is it that a) it can be used to bring back Megatron (even tho it killed him in the first movie) and not bring back Prime? Why go all over the world when they had the answer with them the whole time?

3) How did Ravage get back into space? He was launched from Soundwave in space twice....

4) The robot had a gold tooth!

5) If they can make a terminatrix why do they even have giant robots? They can infiltrate and you know...kill humans much better than any Transformer.

6) Sooo, what exactly was The Fallen doing throughout the entire first movie (or even all the time while Megatron was frozen in ice)? just sitting around on the moon (or some other planet)?

7) If the Fallen could only be destroyed by a Prime, why didn't the originals just gang up on him back in the day?

8) Speaking of The Fallen and the Primes...Why not just destroy the Matirx?

9) How does one satellite receive transmissions from everywhere on the planet? And in the original movie aren't they susceptible to cold based weapons? Hey Micheal Bay, In space it's cold! (as he counts all the money he's made!)

There is so much more I can ask....but I'll end with

10) If the source of power is the sun, then why did they land on earth? If there was an energy source, wouldn't you build closest to the source (like say Mars or Mercury)?

I'd say don't watch it, but based on the numbers, you already have!
Posted by MFC Studios at 5:09 PM 4 comments:

So despite the bad trip I had to the Wizard Philly con, it was a nice one. Empty, but nice. A weird thing about this con was that even tho you got a badge, all you needed was a wrist band....I wonder how many people used the same band for all three days?

Marvel and DC opted out this year (which may be a sign of the times...), But alot of my good buddies were there. I ran into Jose Caldron and Daphne Lange,
The HBC guys, and
Brian Kong just to name a few. Because of car trouble, I only got to really enjoy the con on Saturday. So here's what I did/saw...

On the show floor, not one, not twice, but three times did I run into Jill Pantozzi, better known as The Nerdy Bird. We attended an Archaia panel together. Seems that they just recently went under a re-structuring and are back on track publishing their titles. I really, really, really wanted to see Cerina Vincent (as mentioned before) but it turned out that she was.....not as hot as I had hoped. So I actually saw her all by her lonesome, but didn't approach her. Besides, she didn't have any power ranger stuff with her and if I am paying for an autograph/photo It will be a higher caliber ranger (maybe Amy Jo Johnson...). The only people that I noticed that had any kind of crowd was Edward James Olmos, Ray Park, and Ted Rami. Oh! I got to see the original Kight Rider car! Took a photo with it (it had its own table..). 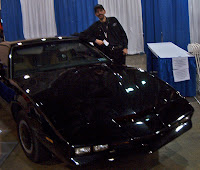 Here is some insider info, I ran into The Last Dragon's Taimak very nice guy! He tells me that there is a remake of "The Last Dragon" in the works...Sadly he was asked to have a cameo and nothing more....To me, he looks like he still has the glow!
Posted by MFC Studios at 12:20 AM 2 comments:

Just to clear things up

OK, I went to the free (and final) Big Apple Con this past Saturday and I got "the scoop" on what is actually going on there. First and foremost, Mike Carbanaro (who we have interviewed a few times, and who has supported me for many years), former head of the con will still be running his own one day shows (much like this past week's) under a new name! Mike Carbo's showcase cons (or something like that, I don't have the official title yet). The locations will change from time to time, but it will be the same little con that could. The (former) "National" con (which was the Big Apple's 3 day event usually in November), is now taken over by Wizard and is the Wizard Big Apple Con. Mike Will still be running the con, but it will (most likely, cause with Mike you never know) be like a franchise as opposed to an actual "Wizard" con.

As for this past con, it was actually in the Hotel Pennsylvania (as opposed to right next to it) with two separate rooms. One for the dealers and one for the celebs (and artists). I did a once over, but mostly hanged out with Brian Kong while I was waiting to meet up with the head potential company who has expressed interest in re-branding our radio show (more on that later!). The thing that stuck out in my mind at the con was Tiffany Taylor she was sitting right across from Brian. I didn't know who she was but I did think she had a "natural beauty".

Speaking of hot chicks, I'll be "unofficially" at the Wizard Philly con this weekend. I really want to meet Cerina Vincent (she used to be a Power Ranger). The Bonus is that she is still smoking hot (or I hope so)!

Posted by MFC Studios at 8:58 PM No comments:

Who wants to go for free?

Hello all,
I had planned to talk about the new Land of the Lost movie, but since it really isnt worth it, I'd figure I'd mention something of importance!
The Big Apple con is having a Free con this (6/13) Saturday! This will be the last con before Wizard takes over. The con will be in Manhattan across the street from Madison Square Garden. Best of all, it's a free one! So go there, buy stuff, support the vendors, artists and celebs, and give the Big Apple Con a great send-off!
Posted by MFC Studios at 9:01 PM No comments:

I was Dragged to Hell and this is what I thought

This past week, I saw the Sam Rami movie Drag me to Hell. Now alot of people are saying that this movie is Sam's (like I'm on a first name basis with him) "return to his horror roots". He only has directed a handful of movies and only 3 were "horror" movies (two of which were sequels). So I wouldn't say all that.

I will say that it was a pretty decent horror movie (as decent as a pg-13 horror movie can be). I didn't include The Ring only because that is an exception to the rule.

Before I go any further, this is a free flowing conversation and spoilers may (and most likely will) be mentioned.

Drag me to Hell is about a girl who gets cursed by a Gypsy and well... get's dragged to Hell. A simple plot really, but what made this movie enjoyable were the "low key" effects. Lots of shadows, loud noises, stuff that makes you use your imagination to try and spook you. The horor elements were mixed pretty well with humor and I actually cared for the main character as I watched her 3 day quest to rid herself of this curse. It was a small cast, so no role was wasted altho I have to say that I just could not see Justin Long (who is 31!) as a college professor. To me he is still just the kid from Galaxy Quest and the TV show Ed.

There were a few things that bothered me, but this movie gets a pass because it didn't take itself too seriously. And since this movie delivered on the title (even tho it tried to make you think otherwise) it can be forgiven for any slip-ups along the way. Of course the ending was telegraphed pretty well (for anyone who was paying attention) but it was still an enjoyable ride. I did expect to see Bruce Cambell b/c he and Rami are friends (so much so that he is in all 3 Spidey films) but that was not the case.

So while not "scary" it was a decent movie to see.
Posted by MFC Studios at 10:42 PM No comments: