In the world of entertainment, people... "borrow" ideas from each other all the time. I mean how many shows or movies have the same concept? I recall somewhere that there are only 7 original stories. So it's understandable that alot of stuff is similar.

Some things go too far. Any one remember Go-bots? At the time, many people thought that it was a rip-off of Transformers (actually, Go-bots came to the USA first).

It's the same for comics (since they are also part of the entertainment world). How many Batman (Night thrasher), Superman (Supreme), and Hulk (Pitt) clones are there out there? Even stories are used more than once. Really, how many nefarious plans can one guy have? There was an episode of South Park called "The Simpson's did it". In it, the mentioned that since Simpson's have been on the air for so long, there was no more new ideas out there. Many comic characters have been around for decades, so it is understandable that a story may repeat (or recycle) here and there.

Let's take a look at the Spider-Man/Obama comic. Image co-founder Eric Larsen was quoted as being upset that Marvel comics "stole" his idea from a Savage Dragon comic where his main character saves a president in an (almost) similar way. Ironically, he was also accused of doing the same thing with a Hulk comic (issue #420), where the main character (both Hulk, and Savage Dragon, in their own titles of course) had to face the dilemma of giving a friend a blood transfusion in the hopes that it would cure him of AIDS.

This one however takes the cake. According to Comic Mix, (another) Image co-founder, Rob Liefeld is going to have a massive multi-part inter-company crossover where his character "SMASH" declares war on his entire World. Just for the record, the pencils are supposedly unused pages from his Heroes Reborn work. I bet if World War Hulk wasn't successful, SMASH would not have been seen again....
Posted by MFC Studios at 10:43 AM No comments:

Got any change for me?

It still amazes me on just how many "important Tuesdays" there have been since I started writing this blog.

So today is the day. President Obama.....

I have to say, I never thought this day would come.

Now, lets see what will happen. Since everyone is all about "change" now. Maybe things will change for me and the book (well, the rest of the book) will be published, and the show (in what ever form) will go live once again. A better economy means more sponsors for me! Everybody wins!

But, I look around and nothing has "changed" for me yet!

But to quote Ed O' Neil as Al Bundy "As the man in the stall said to the man waiting, "Give it time."."
Posted by MFC Studios at 12:40 PM No comments:

Still Morphenomenal after all these years

As I have mentioned many times in the past, I was (and still am) a HUGE Power Rangers fan. Because of which I have watched a few movies or TV shows because they have a former cast member in it. Out of everyone, there has been two that have done the most work Cerina Vincent from Lost Galaxy and Amy Jo Johnson the original Pink Ranger.

Cerina has done quite a few direct-to-dvd movies and has had two Feature films.

But I wanted to talk about Amy in this paticular post. She was a main character in the J.J. Abrams' (yes, that one) show Felicity and now she is on a new show (which got picked up for a second season, airing now) Flashpoint. The show isn't so bad, but because Amy is in it, I'll watch it (of course it doesnt hurt that she is still kinda hot). 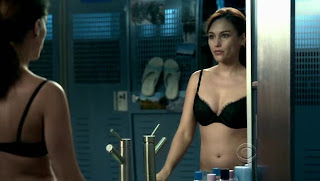 "As with all of my movie reviews, this will be a free flowing discussion so spoilers may be mentioned"

I remember when I used to say that 3 times per show when we had a movie review show. Anyways...here is my

A lot (and I mean ALOT) of people is trashing this movie. I saw it Sunday night and I thought it was OK. Yes, just OK. I cam see what Frank Miller was going for, and I think it was hit or miss at times. Now I have never read, (nor even really heard of) The Spirit, so I went in with no expectations at all. Well, almost, I knew that the "style" of the movie was supposed to be like Sin City.

The movie started off on a down note but it tried to work its way back to to an OK movie (I mean Having the Hero and main villain fight in the first few minutes of the movie is never a good thing, cause where do you go from there?). We did have a bump or two along the way, such as the use of a cell phone in what appeared to be a period movie and the oh-so-bad-over-the-top acting that if you take it seriously for one second, you will not be able to enjoy this movie. By the time we got to the end of the movie was all set for whatever they decided to throw at me, but I was so wrong....

Here we are at the climax of the movie. we are led to believe that The Octopus has killed The Spirit for good this time, the Femme Fatale and the Octopus' side kick (played by the oh-so-hot Eva Mendes and Scarlett Johansson respectively) are facing off and the place is surrounded by cops. Now for no reason at all, the Commissioner (played by the guy who was the dad in the "Wonder Years") decided to call in an all out assault on the Octopus (aren't they supposed to arrest people?). When I say "all out" I mean ALL OUT! every cop starts shooting, and they bring in the helicopters to shoot at one man just to make sure they got him! I was like what the hell? I'm still shocked about that 3 days later!

Like I said, it was an OK movie, something that probably will get alot of airtime on network TV/basic cable in the years to come.
Posted by MFC Studios at 12:03 PM No comments: