Monsters vs. Aliens in 5D?

Well, If you see the 2D and 3D version of the movie isn't that 5D? Hey, they all can't be winners!

At any rate, I had the luxury to see both versions of Monsters vs Aliens (for free of course) just a few days apart.

I saw the 2D first then upon enjoying it and realizing that some parts would look really cool in 3D, I went to see it again. Let me say that the 3D felt like an "enhancement" (or maybe whipped cream on top of an already tasty dessert) to the already good movie.


As with all of my movie reviews, Spoilers may be mentioned.

Keeping in mind that the target audience are kids, I think the guys at Dreamworks put enough jokes and classic movie references (such as The Blob, or B.O.B.'s origin or the use of the Close Encounters theme) to keep adults entertained. It's a simple story about Susan (voiced by Reese Witherspoon) who is hit by a meteor and becomes the 50 foot woman. During this time, there is an alien invasion and Susan (now called Ginormica) along with her fellow monsters must defend the earth. Like I said, simple.

The movie was funny, the animation was top notch (even in 2D, you can appreciate the depth and the movements of the characters) and above all, it was entertaining.

If I had any complaints it was the under use of Insectasarus (a Godzilla-type monster, eats Tokyo). For his size, his abilities were lacking and even tho he did save the day (or at least our heroes) at the end, I felt he could have done more against the giant robot in the initial battle. Then again, it's not his story, it's Susan's.

Here's something that happend to me a while ago, but I hadn't thought about it until I found out that the SDCC is sold out (for the 4-day passes, yes already).

A few weeks ago I was at the C.A.G. Indy after-party for the NYCC. I was talkng with a few comic guys about my not being able to get a table for the SDCC of last year. A good friend of mine did have a table, but wasn't sure if he was going to attend. At the party, it was suggested to me that I just should have hijacked the table (because when I got there, the table was empty). I replied that I was too afraid that I would have been caught and kicked out of the con. Then, it was suggested that I say to anyone that came along, "Yeah, I'm just holding the table till the guy gets here.". And Since I knew that A-I would have had the blessing of my friend to sit there and B-aat that point in time I knew he wasn't going to attend, it would have been fine for all involved! Of course this revelation was about 7 months too late! Live and learn, live and learn....
Posted by MFC Studios at 6:24 PM No comments:

These past few weeks, I have been talking with one of my Co-hosts of the (still on hiatus) Comic Book Novice radio show, and he was like, "what you need to do is to (possibly) make a brand new show."

What he meant was that perhaps "the Comic Book Novice" has ran it's course and it's time to do a new show. Much like Conan O'brien has moved on to the Tonight Show...

Either way we are coming back. I just hope it won't be like "New Coke".
Posted by MFC Studios at 10:02 PM No comments:

I watched "The Watchmen"

OK, I read the comic a hundred years ago and barely remembered anything from it except that I enjoyed it waaaay back then. Keeping that in mind, I went in pretty blind in the theatre. However, after watching the movie, I managed to borrow a copy and re-read the book.

As with all of my movie reviews, spoilers may be mentioned.....


My Favorite writer of all time Peter David once said that the real purpose of a comic book movie (or any movie that is based on "X") is to get people to buy (or research) the source material. After watching Watchmen, I did just that. It's funny, I believe this is the first time that the movie was better than the book. To me, re-reading the book was like watching a "director's cut" of a movie. I can see why it was cut to begin with. The only main difference between the book and the movie was the dynamic between I really wasn't feeling the chemistry between the two in the book, whereas in the film, they just clicked so well. The end of their story arc was also altered, but I liked this version better.

Speaking of endings, the how (but not the why) was...adapted for the movie. Seeing as how a lot of key scenes were dropped/edited out (and rightfully so)leading up to the giant squid invading N.Y., it made sense to keep him only in the pages of the comic. To me, I felt that blaming Dr. Manhattan was a better way to go to tie the movie together.

There are a few things that were explained in the book that were left out in the movie such as the symbol on Dr. Manhattan's head (a hydrogen atom) and Rorschach's moving mask (special heat sensitive fabric).

The one that stood out the most to me was, where did the Silk Specter get her costume from? (in the comic, instead of just showing up on Nigh Owl's apt empty handed, she moved in a few days later having her things sent from the military base to the apt).

Many shots/Dialog were lifted directly from the book, further showing that a comic book can translate well into a movie form. Speaking of which, I am reminded of last week's post about Chun Li and the director saying that he didn't want costumes in his movie because he wanted to ground his movie in reality. There were costumes in Watchmen, (hell there was a giant blue guy walking around!)

yet it felt more "real" than any part of Chun Li. So it's not the costumes, it's how you use them.

Since I am on the topic of the giant blue guy, I have to mention his.....Pepe' Grande Azul. I didn't remember seeing it in the comic the first time and I sure as hell didn't expect to see it featured in the movie, but there it was, just hanging out for all to see.

Lastly, I wanted to mention a couple of things that were added to the movie that weren't in the book, such as the actual fight between The Comedian

and his killer, how Rorschach got his costume back in the prison as opposed to going back into his place for a "spare" and the actual fight in the prison. Good stuff all around.

Keep in mind that when you go see this one, leave the kiddies at home. It's rated "R" for a reason!
Posted by MFC Studios at 12:14 PM 3 comments:

You read right, that is what the marquee said for the new Kristen Kreuk movie Street Fighter: The Legend of CHUN Li. That right there should have been a omen of things to come in the horrible, horrible movie. It's so bad that it makes the original an oscar contender by comparison!

As with all my movie reviews, spoliers may be mentioned.


For those of you that don't know, Street Fighter is an arcade game which was super popular in the late 80's. So much so that Street Fighter 4 was just released a few days ago. This movie focuses on one of (if not the first) female playable character in a fighting game. Chun Li is Chinese and (even if she doesn't look it, Kristen is also of Chinese decent) 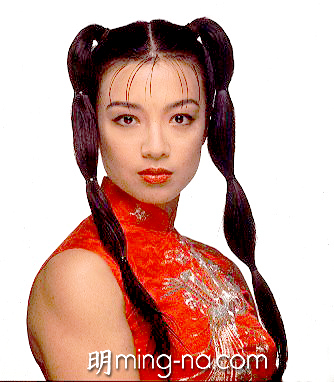 Wait a second! Those last two pics arent of Kristen, but of Ming-Na Wen (she played Chun Li in the original). Which one looks more authentic? now to be fair, I didn't post a shot from the actual movie, but there are no costumes (well, maybe except for 
Now I'm not going to get into the whole "Hey this wasn't in the game!". Instead, I'm going to take a look at it strictly from a "stand alone movie" view. In an interview, the Director stated that he wanted to "ground this movie in reality, like the X-men movies (referring to the lack of colorful/original costumes as seen in the comics/video games/cartoons)". That's fine, but except for the fact there there was no costumes, the "reality" was not real at all. The dialog, motivations, even just plain simple actions left me wondering, "What are these people thinking?". For example, the evil scheme (which really was just something to fill up time in the movie) was this: Bison (played by Neal McDonough Blackmails (I believe) some important people in the Chinese govenment to sign over some public property to a company so that he can buy it back for a profit? Or for no reason at all (well, after recieving a mysterious scroll and talking to some random lady) Chun Li has to leave all her possesions behind and live on the streets so she can meet Gen, a Kung-fu master (played by Mortal Kombat's Robin Shou). Or even when Bison decides to destroy Gen's home (where Chun Li is now training/staying at). He send in a (for lack of a better term) a SWAT team, THEN has the place blown up with a rocket, THEN hires his Assassin to go and Kill them? Shouldn't that be the other way around? Finally, to learn more about the evil corporation run by Bison (after looking him up on the internet), Chun Li goes into a club where she does what can only be described as a pseduo-lesbian dance-invite/lure (you just have to trust me on this) so she can get Bison's right hand woman away from her bodyguards to interrogate her.

"What about the fighting?" you may ask. The Jackie Chan/Jet Li movie The Forbidden Kingdom was a below average movie. However the fight between the two aformentioned actors made everything bad about that movie go away. Sadly this is not the case. Now just about everyone cast in the movie is not a fighter so I didn't expect much. But I know fake fighting can be just as good (IE: Charlie's Angels). The fighting was sub par and the slow motion effects didnt help maters any.

So is there anything good about this movie? 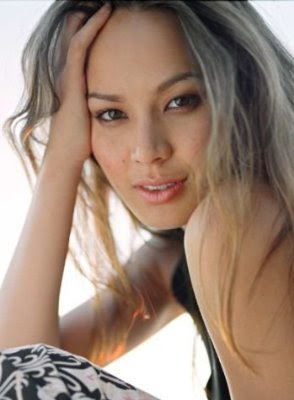 At least, she was smoking hot (even if she really didn't have much to say/do that made any sense)....
Posted by MFC Studios at 2:27 PM 3 comments: